Police complained that more than 120 officers were injured (one had a bruise on his arm) and some 86 demonstrators were violently arrested during popular defence in the German capital which mercenary police complained was ‘the most aggressive and violent resistance in the last five years’.

They declined to say how many brave demonstrators were hurt by the 1000’s of ‘overzealous’ fully armed hysterical police on overtime double-pay. The day’s headlines went planetwide on commercial media ..”Anarchist  terrorists hurt  over120 nice innocent Policemen’‘.

The ”terrorists” were protesting against a total gentrification of their area which is destroying their progressive culture which has occupied some abandoned property for community use. 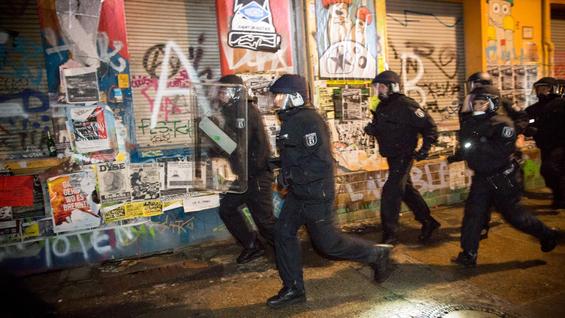 In short a confrontation between a heroic voluntary movement of humane common sense and the well paid agents of the insane capitalist machine rushing us all to the cliffs of war, economic collapse and planetary ecocide.

Police riot units, many of them inebriated and apparently drugged, were drafted into Berlin from all over of Germany. The agitated standoff resulted in multiple injuries and arrests.

An estimated 7,000 amazingly brave people resisted the onslaught in the Friedrichshain and Kreuzberg neighborhoods on Saturday and during the night that followed. They were opposed at least 1,800 attacking mercenaries all armed to the teeth. Police units came to the German capital from at least four different federal parts of Germany.

The protestors in Berlin met near the iconic Rigaer Strasse occupied social center, which recently has been monitored 24/7 by police as a popular get-together location. The activists were banging pots and pans, Spanish style, and shouting:“Get the piggies out of the Rigaer!” Deutsche Welle reported.

The resisters put out a banner, saying: “You have sold the entire city”, outside the Rigaer Strasse meeting point.

As time went by, the besieging police escalated the tension and defenders began throwing objects at the lines of attackers, then a firework was thrown at police as well and …

At the peak of the clashes, the courageous defenders were accused of damaging vehicles of the attacking army of police and allegedly ”broke windows in a number of stores”.

Police then attacked the local people with tear gas, and violently kidnapped and are holding in cells at least 86 people for defending their beliefs and livelihoods.

Although police declared their offensive over by 11 pm, there were reportedly clashes with the occupying forces late into the night, with paramedics busy providing medical assistance to blood-stained police officers and protesters alike. 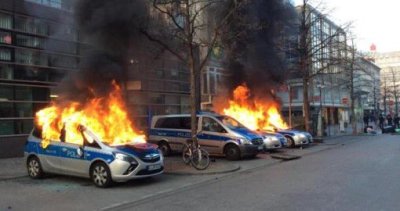 The confrontation in Friedrichshain neighborhood, a cultural and nightlife center in the German capital, has been brewing for years.

The municipal authorities have been trying but failed to destroy the autonomous center at Rigaer Strasse and expel progressive leftist squatters and their supporters, who have illustrated that another world is possible in the face of massive property speculation that is annihalating their way of life, and have openly called for self defense over the last weeks.

The activists also strongly opposed the constant presence of police surveillance 24/7 around the Freidrichshain meeting place.

Berlin Mayor Michael Müller, a center-left Social Democrat, proposed a peaceful option so that the market speculation and gentrification could do its dirty work, and invited the residents of the Rigaer Strasse squatters to sell out their movement at the negotiation table. 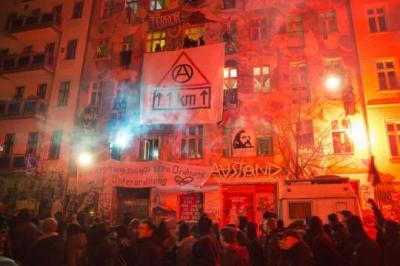 The mayor’s center-right Christian Democrat opponents argued the city is too soft on eradicating the brave and selfless heroes of the ”violent and evil extreme left” across Germany.

Germany: Saturday night riots in Berlin end in injuries and arrests — Far-left violence is on the rise across Germany

”We had an appointment at Alten Jakobstrasse to make our anger at exclusion, expulsion and control visible with paint, stones and fire, as well as our disgust for a city for the rich.

The targets of our action were ‘Fellini Residences’, a new luxury homes complex under construction by the Patrizia building company, their office in the yard, another office of the company, a Vattenfall processing plant, several luxury cars, a hotel and a supermarket. We secured our withdrawal with two barricades in flames and four-pointed nails.

New luxury constructions represent a form of urban development in favour of the rich and show the widening gap between the included and the excluded very clearly.”

”While some enjoy ‘a sentimental staging of Italian quality of life’ in their apartments, the rabble are kept at bay through surveillance cameras. While some celebrate the increase in property value, others remain in fear of forced eviction.

Those who organize themselves outside the logic of exploitation and take possession of urban spaces will be met with police truncheons, as recently happened during a Kurdish street party in Kreuzberg and in repeated squatting attempts for a social centre.

If an entire neighbourhood opposes resistance, all of a sudden it is declared a ‘dangerous area’ so that people are terrorized with harassment, control and violence. Anyone who thinks they can suppress the voices and actions raised against expulsion got it wrong. We turn up when least expected and strike where the filth of politics manifest itself.”

”As long as there are profits in the housing area our initiative will be sabotage and destruction. Every eviction has its price!

Energy multinational Vattenfall does dirty business out of natural resources, including the lignite mines in Lausitz. A war for underground resources is being waged all over the world, everywhere ecological catastrophes are responsible for misery and expulsion. …In the name of a high tech world society passes over dead bodies without giving a damn. After decades of brainwashing and alienation it has become so apathetic that it doesn’t realize we are on a train heading full speed ahead straight against a wall…

But with joy we look beyond the country’s borders and see the fires on the horizons, set alight by young people and workers in France just as in many other parts of the world, where revolt against dominant conditions is emerging. We recognise you and send you our flaming solidarity and greetings!”

Germany: Saturday night riots in Berlin end in injuries and arrests — Far-left violence is on the rise across Germany

Left-wing extremists and police have clashed in Berlin after months of tension. Some 1,800 officers were on duty to patrol demonstrators upset with the constant police presence outside a popular left-wing meeting point.

An anti-authoritarian left-wing demonstration in Berlin ended with multiple injuries and arrests on Saturday night after protesters clashed with police in the Friedrichshain neighborhood. Despite deploying some 1,800 security personnel there and in neighboring Kreuzberg, paramedics still found themselves tending to bloodied officers and demonstrators alike. 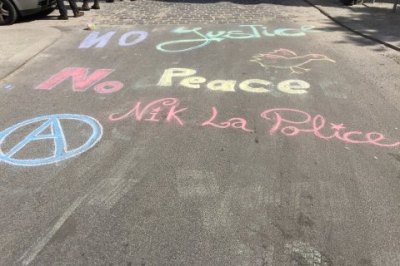 Some 2,000 leftist radicals had gathered for the express purpose of protesting the constant police presence outside a house they use as a meeting point. They began banging pots and pans with spoons and shouting “Get the pigs out of the Rigaer!” referring to the street in Berlin where their gathering point is located.

.
As tensions with the police escalated, they began setting off fireworks in the direction of the officers . Authorities have said they will give the public more details in a press conference on Sunday.
.

.‘You have sold the entire city’ says a banner outside the Rigaer Strasse location.

.The leftists have made open calls for defence in recent weeks to show their opposition to the round-the-clock surveillance on the Friedrichshain meeting place.