‘Robin’ is a Catalan activist who took out bank loans of 500,000 euros and gave the cash to occupiers, anarchists and Coops. Then he helped found the fast growing CIC (Integral Coop), a group of leaderless assembly-run, coops with their own ‘anti-money’, the ECU, which aims to evade the inbuilt exploitative control of the world money system.

At his trial the State banned his witnesses who aimed to expose the multi billion frauds of the banks themselves, So Robin (Enric)  ‘did a runner’, and he’s still free.

‘He presently lives as a fugitive outside Spain, and is currently busy organizing the FairCoop – Open Cooperative, a community-built effort to alleviate global economic inequalities through the use of mutual credit, reputation systems and cryptocurrencies’. (here’s lots more about Fair Coop http://commonstransition.org/portfolio/faircoop/)

Coops have failed in the past, being shriveled or swallowed by capitalism, like fruit trees in a desert. ‘Robin Hood”s answer is Faircoin, a socialised bitcoin project which is currently taking off.

‘……..A new economy begins with a new kind of money. If you’ve managed to live in something close to a gift economy: congratulations, you’ve made it! This only works for some of us, though, living in relatively small communities, and not on a global scale. You have to realize that you’re not really changing your neighbors’ world by trading Ubuntu installs for massage; you’re not overthrowing the hyperarchist system of human domination by paying for your tofu in rainbowcoins, now, are you?

While complementary currencies do a great job at local level, they’re just that: they complement other parts which together make up a whole. And what we really need is to build up a whole new way to live in this world.

FairCoin and a fair economic system from Radi.ms on Vimeo.

Here we go! So, we need money, we need decentralized international markets, financial tools, solid trade networks… a financial system, after all. Money, or food for that matter, aren’t harmful: bulimia or capitalism are. Money can and should be used for the common good — and by money we don’t mean fiat currencies, of course. Fiat currencies are created and controlled by an evil structure, and used for tyranny and planetary destruction (also, we don’t see a way we are ever getting any of that pie).

We need to create our own monetary system — a better one, one that will suddenly make theirs obsolete and their banks worthless, just like the electric car would do with the gas distribution network. And we need the transition to be fast enough so they don’t have time to react and use it for their benefit. What you’ve just read is the definition of the term disruptive technology……”’

extract .From Cryptocurrencies to FairCredit  by Enric Duran 2015
The economic system promoted by faircoin, explained!! first published on ROAR and GNUnion

So that’s the latest on the mushrooming ‘Robin Hood’ saga, a series of practical initiatives to find real ways to bypass the economic stranglehold of the banks and the 1% who are fast destroying our planet.  Well worth checking out I think, via the links in this post.

….”We do not destroy the system by attacking it with our wooden spears. We are creating a valid alternative, and have started developing it. FairCoop aims to provide new, free, collaborative economic, social and technological tools for everyone, and will try to make sure they are used in a cooperative way for the creation and expansion of the commons worldwide. An Earth cooperative to build the fair world of the future. 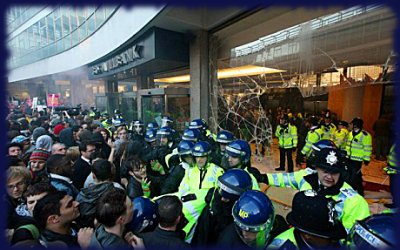 We can all help to make this happen. You can learn about the different ways to get involved here.

Pablo Prieto is a scientist working on the science of a post-capitalist world. He is a member of FairCoop…”

Enric Duran is a post-capitalist activist and co-founder of the Catalan Integral Cooperative and FairCoop. He is widely known as the “Robin Hood of the Banks” for his legendary anti-capitalist bank swindles.